For twenty-one years professional wrestling fans are still talking about what they feel is the greatest wrestling game of all time, WWF NoMercy.  The WWE (then WWF) exclusively released No Mercy for the N64 in November of 2000. With so many different wrestling games throughout the years, why is No Mercy always at the top?

First is the “pick up and play” controls of the game. No Mercy and its predecessor Wrestlemania 2000 were developed by AKI. AKI previously developed video games for WWF’s competition, WCW. AKI and THQ helped release two highly successful games for WCW, World Tour and Revenge, which were critically better than WWF’s games Warzone and Attitude. The WWF convinced AKI to develop games for them and sales went through the roof. AKI games were significantly easier to play. Each button had its own function, but also gave different styles of attacks if you held down or tapped it. The controls were simple to understand for beginners and relatively easy to remember so the player flowed through different moves. The more you played the more you understood how to control your wrestler fluently.

The biggest difference between No Mercy and the previous installment Wrestlemania 2000 is the career mode. Wrestlemania focused on a full calendar year of matches, where No Mercy put your wrestler in storylines based on the championship belt that you desired. To make it even better, your path changes whether you win or lose, something that was completely new at the time. Some situations do get unnecessarily hard like handicap matches or pinning a certain wrestler as a requirement, but it’s very fulfilling when you complete it. After winning the title you can continue the story mode as the champion giving the player even more content. Trying to complete all of the story modes make you want to find out how each storyline plays out. When you win matches you receive money that you can later spend at the “Smackdown Mall” where you can buy locked wrestlers, arenas, moves, and wrestling attire.

No Mercy was the first wrestling game on the N64 to feature a Ladder match, Iron Man match, and a Guest Referee. The Ladder match could be tricky because you had to set up the ladder directly underneath the belt/suitcase. It was cool at the time given that Hardy Boyz were at the height of their careers. The guest referee was a match that could end friendships. If you were with a group of friends and chose this as a matchup, someone was going to be upset. The player as the referee could strike other wrestlers and could count as fast or slow as they want. If they really didn’t like you they could also not count at all. The Iron Man match in my opinion is the best match added to the game. An iron man match would have a set time limit and whoever pinned their opponent the most in the allotted time wins. It was perfect for two players who have mastered the game. 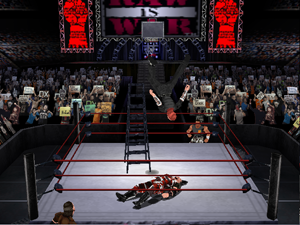 Fighting in the backstage area was another extension of No Mercy that was the first of its kind. Due to the growing popularity of the WWF’s Hardcore division developers decided to add the ability to fight in different backstage places such as the stage, hallway, locker room, boiler room, parking lot, and an arena bar. It made it fun to explore the different parts of the arena as you were fighting your opponent.

The roster was loaded with 74 wrestlers. Some needed to be unlocked in the story mode, while others needed to be bought in the “Smackdown Mall” such as Cactus Jack, Shawn Michaels, Ken Shamrock, and even one of Godfather’s Ho’s. The roster gives the player their choice of four different ring attire and could change outfits in the “Edit Wrestler” section. For example, if you loved X-Pac in his red and black singlet, then you can change it to that. You can also buy different outfits in the “Smackdown Mall” and put them on any wrestler on the roster.

One of my favorite things to do as a wrestling nerd was to create the “secret wrestlers” in the game. In the “create a wrestler” section there are headshots for Mideon, Gangrel, Dude Love, The Headbangers, and The Mean Street Posse. All of their outfits can be bought in the “Smackdown Mall”, and if you had enough time (like I did) you could create them. If you wanted to go a step further you could even create WCW wrestlers almost identical to their likeness on WCW Revenge. As stated above the developers, AKI,  used the same engine to create the WWF games, and they did the WCW ones previously. Meaning a lot of the WCW wrestler’s moves are in the game. There are a ton of walkthroughs online that could help create WCW wrestlers in a WWF game without mods.

No Mercy does have a few flaws. First, the Big Show is absent from the game because he was going through some legal issues at the time, although you could easily create him. Another qualm I had with the game is that you never see the wrestlers enter the ring pre-match. They’ll do a taunt on the stage and then as they walk down the ramp it skips to the next entrance. This isn’t a big issue but since the previous installment Wrestlemania 2000 included it, it’s strange that it’s absent from No Mercy. The biggest bug is that the tag team wrestlers do not come out together. This is definitely a nit-pick, but this is another area where the predecessor did it better. In Wrestlemania 2000, tag teams would always come out together as long as their music was the same. No Mercy had a bunch of really good tag teams and it’s a bit disappointing they don’t walk out together.

WWF No Mercy is still regarded as the “Crown Jewel” of wrestling games. Video game developers are still trying to emulate it, and wrestling fans are still creating mods for it. It rightfully deserves the praise of the “greatest wrestling game of all time”.