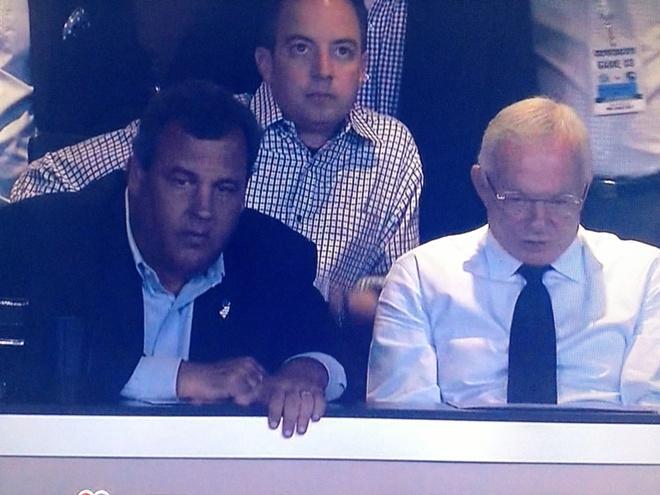 It seems like every year during an Eagles versus Cowboys game we are treated to the nauseating visual of Chris Christie and Jerry Jones watching the Cowboys throw their season away.  Christie has been watching games with Jones since I was in grade school, and I started to wonder, why is Christie a Cowboys fan?  Maybe his Mom is from Texas? Or maybe Christie spent his summers in Dallas?

Boy was I wrong. We all grew up with kids who liked the Warriors or the Patriots for no reason other than the fact that they were good.  I can also say with certainty that those people are generally the WORST.  Usually these types of people have very little redeeming qualities, and I would say that Christie falls into that category.

Christie’s choice to become a Cowboys fan because the Giants were bad is a prime example of a lack of character.  My dad and grandfather sat in the 700 level of Veterans Stadium, and watched bad Eagles teams year after year.  Did they ever just say screw it? Roger Staubach is better than Ron Jaworski. Let’s be Cowboys fans?  Hell no.  While my Dad and Grandpa were sitting in the Vet freezing their dicks off, Christie was probably in his cozy North Jersey home eating a bucket of KFC, watching the Cowboys win year after year.

Christie did not have the (as Bill Rafferty says) “Onions” to support the Giants through the good and the bad.  This is nothing more than a lack of character, as it is a mentally weak action to not be able to deal with disappointment.

One of my favorite things about sports is the sense of pride you feel for your hometown.  Philly hates New York, San Francisco hates Oakland, Pittsburgh hates Cleveland.  The list could go on forever.  That is the beauty of sports, as there is nothing better than beating your rival city.  The sense of being better than someone at something is what drives people to NFL stadiums every year.

I cannot speak for everyone, but I know that if the Eagles lose to Dallas, or New York my week is ruined.  But through all the good and bad, I will always have Philly sports.  It is a part of me, as it is for so many other people in the Philadelphia area.  When you don’t have enough character to support your local team, you lose that sense of regionalism, that sense of pride.  Win or lose, our whole area is in it together, and that is a beautiful thing.

In Christie’s case, his job was to represent the state of New Jersey to the best of his ability.  But yet, he can’t even support any of their local teams.  He’s not even a fan of the Mets or Rangers.  How is that not screwed up?  Look I may be reading into this too much, but you can’t argue with the fact that it is a lack of character to jump ship, and not support your local sports team when the going gets tough.

This may sound silly, but I could never vote for a man who does not have the cojones to support his hometown team.  For that reason alone, regardless of politics I can never support him.  I also deeply regret the fact that I took this picture with Christie after a youth hockey game.

Side Note: I am extremely excited to be working with Branded, and I cannot wait to share my outlook on the world of sports with you all!