There’s no better feeling than setting a goal at the beginning of the year, working towards it, and achieving it with 4 months to spare and Kelly Osbourne is currently riding that high all over social media. I think I speak for everyone at Branded Sports when I say we’re pro- goal achieving so from us to a Kelly we’d like to say congrats!

Of course just like any other weight loss story there were critics flooding social media with their spicy hot takes. But these weren’t your normal critics that felt the need to get in one last fat joke.

Nope these were critics that basically told her she shouldn’t have felt the need to lose the weight. Yes you read that right, we’re out here shaming people for losing weight folks. Which is just an absolutely stupid take.

Now is the part of the blog that you probably expect me to rip on fat people for being fat and saying everyone should feel ashamed of themselves if carry some extra weight. To those people I say “please see the previously posted GIF’s above”.

If you’re comfortable in your skin and your body regardless of your shape, size, or whatever more power to you. I agree that sometimes society has set unrealistic expectations for how people should look (especially with females).

I carry around a little extra weight in the mid section since I traded in the soccer cleats for a coozie and I’m okay with that. I’m not suddenly starving myself and working out constantly just so I can fit into my old uniform again. But that’s not to say I’m not doing some cardio (humble brag) at the gym trying to trim up just a bit.

But we’re getting a little sidetracked here let’s get back to the main point. Kelly Osbourne (much like Adele) wanted to live a healthier lifestyle for one reason or another and she’s very obviously proud of herself from the looks of her Instagram. 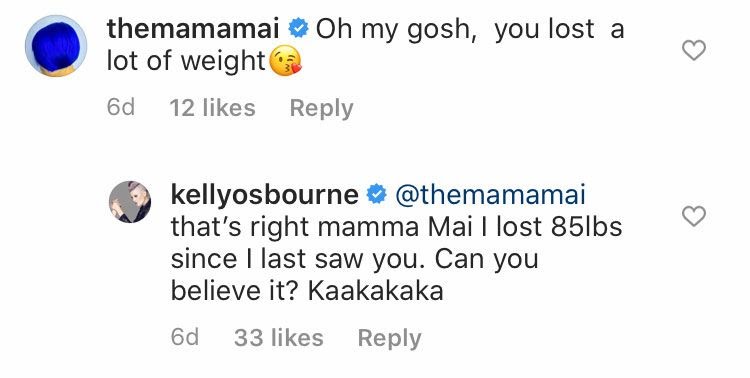 How can you scroll through her Instagram where she’s very obviously proud of herself and then think to yourself “I’m going to comment that this isn’t okay and we shouldn’t celebrate this”?

Now if this was a story on TMZ where the headline said “Kelly Osbourne starved herself to lose 85 pounds to keep hosting job on CBS” I’d say that’s the time and place for comments like that. But someone setting a personal goal to live a healthier life and lose some weight? Come the fuck on.

I don’t really know how to end this blog so I’ll just say this. If you ever feel the urge to take the wind out of somebody’s sails when they hit a personal milestone.

Message to the fun police via Movie Quotes (LINK)