Okay people, draft weekend is officially over and I’ve sat back, calmed down and evaluated all of the picks that the Eagles made. Howie Roseman and the staff stuck to their word and drafted according to what they set their goals to, which was being one of the most fast teams in the NFL. I’m going to give a pick by pick grade for each player and then give a final grade for the overall draft as a whole.

Eagles selected Jalen Reagor with the 21st overall pick and at first I was still infuriated because of the Eagles allowing that smug cockroach Jerry Jones to select Ceedee Lamb. When the smoke cleared and my temper settled down I was actually very happy with the selection. I’ve been a Reagor fan since the beginning of the college football season. His unique combo of speed and strength is rare to come by. I keep seeing the “he’s too small” comments and I laugh. He may only be 5’11 and 195 lbs but the kid squats over 600 lbs, benches and cleans close to 400 lbs. Jalen is a straight up tank in the weight room and it shows on film, especially when he goes up for 50/50 balls. 9 out of 10 times he will end up winning those battles. Yes, he ran a 4.47 40 at the combine but his game speed is a hell of a lot faster as you can tell in the video above. Reagor fits the teams goal of getting guys who have outstanding speed and a guy open down the field for the live arm Carson Wentz has been waiting to display.

So the Eagles selected an Oklahoma Sooner…. But it wasn’t the one anyone on this planet expected. Jalen Hurts QB, Heisman runner up was the teams choice in the second round. Believe me when I tell you I did not speak for 30 minutes straight. I was in total shell shock. Wait what? Why? Drafting a qb in the second round… Really? What is the logic behind this? All these thoughts came to my head immediately. Especially since obviously my beloved Eagles have Carson Wentz an almost (should’ve been) MVP in 2017. Easily a Pro bowl quarterback every year. Not to mention only a 27 year old kid who is in the prime of his career. Im not sure if Im still even completely over the pick, but at this point theres nothing we as a fan base can do but just accept the fact the Eagles actually brought in a star studded back up quarterback who has potential to one day be a starter. That day wont be anytime soon (hopefully) so I started making some kind of sense of it. One reasoning I get the pick is because obviously Carsons past injuries. Everyone knows it, he has been hurt in the past and we’ve needed help from our back ups. It’s football injuries happen, but having a good back up is something you need in this league so I get the pick from that stand point. Second reasoning I understand it is because he is on a rookie contract and he will be a hell of a lot cheaper than your normal back up vet. Third reasoning I understand it is because the kid can play ball. Im not going to go over all the numbers but they speak for themselves. He is a freak athlete who brings a different dimension to your offense that’ll throw teams off balance. That being said it’s not good in the sense of giving Carson the trust and confidence you think he can finish off a full season and throughout the playoffs. 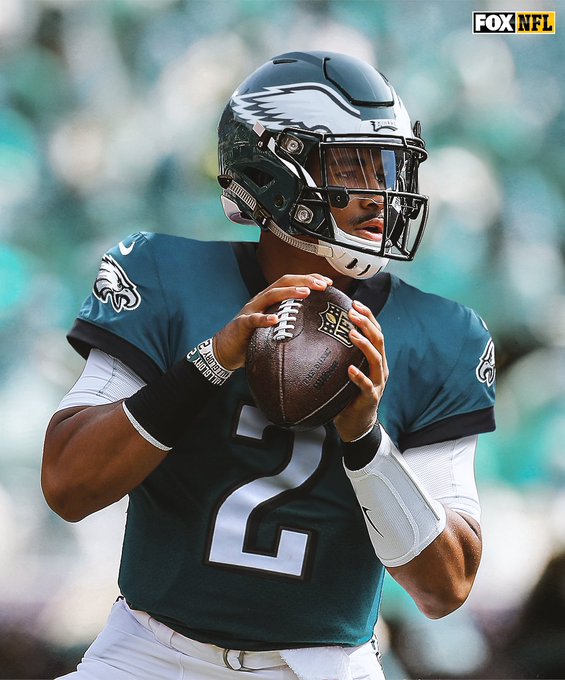 Eagles fans have been SCREAMING for a live actioned linebacker… Well Howie gave him to us… This kid FLIES around the field. Running a 4.49 40, jumping a 35 inch vertical, and leaping for a 127 inch broad jump is some serious athletic traits for a linebacker. He is a sure tackler and a great finisher. High motor guy who doesn’t give up one any play. has a lot of upside as a sideline to sideline linebacker who has the ability to blitz to quarterback at a rapid speed. A bit undersized and still a tad raw in technique but Coach Schwartz is going to love using this guy in many packages.

•No wasted movement downhill on the read read
•takes away any leverage on the blocker to prevent a wash
•uses the right foot/arm to create space, firmly disengages, and gobbles the RB at the attack. pic.twitter.com/YxqUVJderJ

This pick is such a great value pick. Many draft analyst had him going as early as a late 2nd/early 3rd round draft selection. Wallace was over shadowed by teammate Isaiah Simmons but don’t get it twisted this kid can play. K’von is as scrappy as they come. Super competitive and comes with a swagger this team covets. You’re not gonna find many guys who will out work this guy, and his work ethic is what coaches dream for. What Xavier McKinney brought to Alabama is exactly what Wallace bought to the Tigers. He is already a fan favorite all over twitter, and his personality is going to be welcomed right away in this city.

Not much to say about this pick besides its a safe and typical Howie Roseman pick. Jack Driscoll is an athletic and versatile offensive linemen who can lineup anywhere on the line. Moves very fluid for his size. Coach Stoutland loves guys who have the ability to step up and play any position on the line so this pick makes a lot of sense.

Auburn right tackle Jack Driscoll keeps his feet and hands active in his pass sets. Good initial burst out of his stance too. He's got to get stronger at the point of attack, but the movement skills are there. #NFLDraft pic.twitter.com/y4b6rZKilI

The Eagles continued with their notion to snag any football player with blazing speed. Hightower ran a 4.43 40 but runs faster than that on tape. He averaged a whopping 18.5 yards per catch last season. Another trait the Eagles have been adding this draft is track and field athletes and Hightower adds to that mold. He could stand to put on another 10 lbs to make sure he’s ready for the physical competition coming his way. Also could work on his route tree in the offseason, but other than that Im a fan of adding more speedsters for Carson.

Eval: Hightower is a walking deep threat that could be a great WR but needs to get smarter and focus more pic.twitter.com/Jnmw1UVFEM

The Temple kid gets to stays in Philly and will still call The Linc his home. Has great straight line finishing skills, avoids blocks well due to good strike points. Considered a “thumper”. This kid also has a swagger to him that the city will like. He’s a bit undersized but that seems to be the theme of an eagles linebacker lately. Doesn’t seem to immediately recognize run plays off the line of scrimmage. All and all this pick screams a valued special teamer who could be a good back up.

Eagles once again stressing the speed factor here. The difference with Quez Watkins is his speed is off the charts. Running a 4.35 40 at the combine and his game speed looks 4.2. This kid, as the scumbag Unger from the longest yard said “He’s fast, he’s so fast he makes people who are fast, look not fast”. He has improved his contested catching as well as route running every year at Southern Miss. Does his best work against a zone defense. He is a bit under sized, could use an extra 5 to 10 lbs to his frame. Only real knock against Watkins is is ability to beat press coverage. He will have to work on that to have a shot to see the field consistently in the NFL. Another value pick here, some analyst had him as a late 4th round grade.

This pick in my opinion is the steal of the draft. Draft analyst had him as high and a 2nd round pick. Wanogho is an athletic pure tackle who has stout technique. He has the tools to become a starting tackle in the NFL. Moves around the line very well and can get into the second level for the quick pass/ screen game. It is said he slipped because of a knee injury in the past, but he played a lot of games for Auburn. He is still somewhat new to football and has more to learn, but coach Stoutland is the coach for the job. Just watch his tape against LSU and 1st round pick K’lavon Chaisson… He completely man handles the man the majority of the game. His upside is through the roof if he can stay healthy.

Final pick of the night the Eagles selected the tweener from Stanford. His tape shows a ton of speed, athleticism, and fire. This kid is super aggressive in the pursuit of the qb. He projects as a standout special teamer/ PS guy due to the abundance of talent on the defensive line.

Going into Saturday I thought Howie lost his marbles… I had no idea what direction he was going to take the remainder of the weekend. After seeing day 3 of draft weekend my perspective changed and I started to somewhat see which way he is trying to take this franchise. The speed and athleticism we ended up with puts us up with Kansas City as one of the most fast teams in the NFL. Though I am still a little ticked off we let that pos Jerry Jones get Ceedee Lamb. I have come to terms with our draft and was left satisfied. I am not blown away by any means but in my honest opinion it will be as a whole one of the better drafts Howie has had due to where the league is going and how he drafted for that situation. Oh, and one other thing…. THIS IS STILL CARSONS TEAM!!!! GO BIRDS. E A G L E S, EAGLES!!!!!!!!!!!